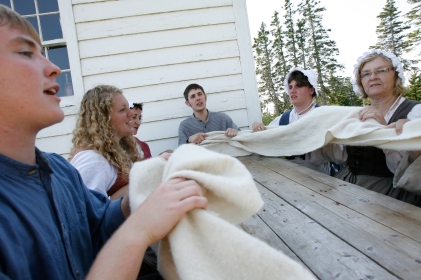 Ur Beatha Blòg a’ Bhaile | Welcome to the Highland Village Blog

Cabar Féidh is a lively Scottish tune dating back to the eighteenth century. Well known in Nova Scotia’s Gaelic music tradition, the tune is usually played as a reel on the pipes and fiddle. It is also sung as a Gaelic song. A setting in march time has traditional associations with the Clan MacKenzie and as a military air. The Cape Breton bard Dòmhnall Alastair MacDhòmhnaill (Dan Alex MacDonald), late of Framboise, Richmond County, makes mention of the tune’s popularity among Gaels in his composition Òran do Cheap Breatainn (A Song in Praise of Cape Breton).

(When the milling was done and finished, the fiddle was put in tune. We would dance on a smooth (planked) floor. Our preferred tune was Cabar Féidh).

“Cabar Féidh” will feature elements of the traditions, practices and customs of Nova Scotia Gaels, their rich cultural legacy, and the identity that defines our Eastern Nova Scotia communities, as well as Highland Village news and programming information.