When you visit the farm at the Highland Village you often see a small animal that doesn’t quite resemble what we picture as sheep. When you walk to the enclosure you might first mistake what you see as a small goat. However, that’s not the case! They are Soay sheep, a rare breed of sheep that has its genetic origins in the Stone Age.

The purebred Soay sheep, and the Village’s herd of Highland cattle are part of a living exhibit of domestic animals indigenous to the Scottish Highlands and Islands of the 18th century.

Soay sheep take their name from the tiny uninhabited Isle of Soay, part of the St. Kilda group of islands far off the west coast of Scotland. It is thought that the sheep were present on the island more than a thousand years ago when the Vikings were raiding Scotland’s western seaboard.

Soays developed over time into an adaptable, hardy breed capable of living under difficult and hostile conditions. Small in size, a ram will weigh around 80 pounds, and the ewes around 55 pounds, after a summer’s grazing. 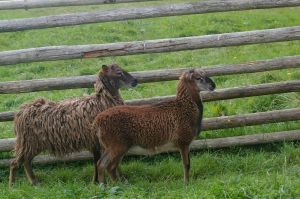 The fleece is normally brown, with short, fine wool, much in demand by hand spinners around the world. Rather than being sheared, the Soay’s wool molts naturally in the spring and can be pulled, or plucked, from the sheep.

Celebrated as living links to Scotland’s ancient past, the Soay sheep are very special attraction for visitors exploring the history and culture of Gaels at the Highland Village. 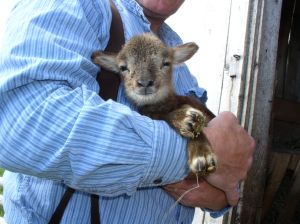 For more information regarding Soay Sheep visit the following websites: