If you mention the last name Maxwell to a native Gaelic speaker, more often then not they are reminded of the Maxwell twins from Malagawatch. 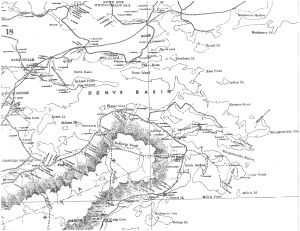 Twin boys, George and John were born in Marble Mountain to George and Mary Jane Maxwell where they grew up in a Gaelic speaking household. Their father, it is believed was born in Halifax and as a young boy brought to Cape Breton by an O’Handley family in Judique during the early 1800s. It was here where George senior would learn the Gaelic language he would pass on to his children.

As the only family of African decent in the area the twins were very much part of the Gaelic community. George and John were well known singers and composers of Gaelic songs, which they often shared, while attended milling frolics. As well, John was a fiddler player, playing many of the old scotch tunes. Both were also dedicated members of the Presbyterian Church.

Both men spent their lives working in the Marble Mountain quarry and some time working on fishing boats off the coasts of Nova Scotia.

George and John married, had small farms and raised families in Marble Mountain. Some of the Maxwell’s descendants still live here in Cape Breton today. 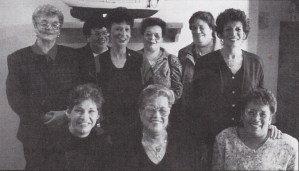 Maxwell descendants at the Highland Village.

Watch here as Jim St Clair remembers the Maxwell Twins during an afternoon lecture held at the Highland Village in May 1997.

For more information and stories on the Maxwell’s you can also visit Cape Breton’s Magazine for a story by Ron Caplan. http://capebretonsmagazine.com/modules/publisher/item.php?itemid=1172

The traditions of producing handmade items for use in Gaelic Scotland in and out of the home was common for our ancestors living in that time.

Many of the Gaels living in the Highlands and Islands of Scotland were unable to purchase materials they needed for their homes due to their remoteness. Often the Gaels would gather material that they found in their surrounding area to building their homes and other things they needed. 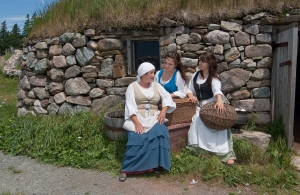 Items such as baskets or creels were commonly found throughout the houses in the Highlands and Islands. One type of basket was known as a mùdag (moo-dak), an egg shaped basked which was carried under the arm and used for collecting wool. The baskets were handmade by the women who would gather twigs, shrubs and grass and than weave them together to make their desired shape.

The mùdag was frequently used for storing wool from the sheep. Often the women would walk through the heather shrubs to collect the sheep’s wool that had been pulled off them while they were grazing in the pastures. The sheep would make their way through the fields and their wool coat naturally sheds. Which is different from sheep we most often see today that need to sheered.

After the wool was collected in the mùdag it would need to be cleaned of dirt and debris, washed and combed before it was spun. They used this wool for making clothing such as socks and sweaters. Much of this work was done while the Gaels sung working songs. 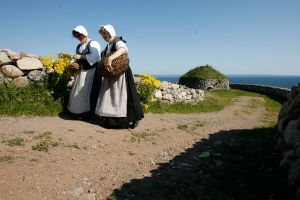